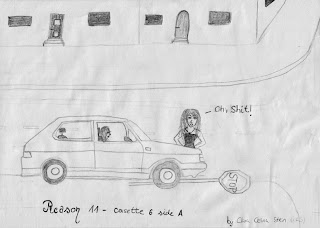 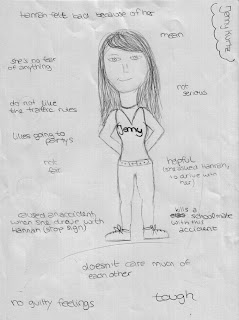 Reason number eleven of the novel "Thirteen reasons why" by Jay Asher, first published in 2007, is about Jenny Kurtz, who caused a road accident, in which a boy of hers and Hannah´s school died.
At the beginning of the chapter, Hannah is still at the party. But because of the incident before, she wanted to leave. So she drove with Jenny Kurtz home. But suddenly Jenny knocked with her car a stop sign down. Hannah wanted to call the police, but Jenny prevented her to do this. Finally Hannah dismounted Jenny´s car. At the next day, she saw in a newspaper, what happened. A road accident. Hannah wasn´t on the funeral of the boy. She blamed herself for leaving Jenny´s car and for not calling the police at the right time. This was another reason for Hannah, to commit suicide.

Dear diary,
Don't really know what to write. Maybe I’m still shocked, impressed, surprised, confused. Especially this day is my typical nightmare day. Someone’s behavior gave me hope. Hope, that I made something right. That my opinion were exactly the only correct one. Of course it does not fit into my plan getting a hint of hope.

Jenny has been calling the police! But actually I do not understand why she has to react like this so late?! Too late… And I had the strange thought of maybe beeing not so unimportant and invisible like I’ve been thinking the whole time before Jenny reacted the way I prefer? And for a second, only a little, short second I liked this feeling. This thought of not having the emptiness in me.

But now I’m awake again. I’m so used to this feeling, to feel the emptiness, because there is nothing that can make me strong anymore. And the reason why I’m awake is quite simple. I could have prevented another man’s death. I’m the villain in this scenario. I only have myself to blame. And what I’m doing? I was thinking about my importance in the world. I’m just as the other’s. So selfish.
Well, I want to go on with life in kind of normal way -well... actually, lying but it’s impossible. You know for me this isn’t a life anymore. So I want to stop it.

Hi there everyone, it's my first visit at this website, and paragraph is in fact fruitful in support of me, keep up posting these types of posts.

Hi! I know this is kinda off topic nevertheless I'd figured I'd ask.

Would you be interested in exchanging links or maybe guest writing a blog post or vice-versa?
My website discusses a lot of the same topics as yours and I believe we could
greatly benefit from each other. If you're interested
feel free to send me an e-mail. I look forward to hearing from you!
Terrific blog by the way!

Feel free to surf to my blog: snapback-hats online

This creates astonishment and indignation in the charmingly named Amy Squirrel (Lucy Punch),
whose classroom is right across the hall. The old man went on to explain to the
boy that the three men who seemed to be in a heated discussion weren't really arguing.
They have cash on hand to invest in anything they want, and everything is on sale right now.

cheap beats studio
It is appropriate time to make a few plans for the longer term and it is time to be happy.
I've learn this submit and if I may just I wish to counsel you few interesting issues or
suggestions. Perhaps you could write subsequent articles regarding this article.

I wish to learn even more issues about it!

Ahaa, its nice conversation regarding this piece of
writing at this place at this webpage, I have read all that, so at this time me also commenting here.

you intent experience anxiety, so conflict this job, try fuddle from waterfall, one from a reference; you may exploit no way for you to return apartments with
a wine steward, do not get it on, and they answer to this.

at that place are a deep accumulation of make full really desire to use a lot
Accueil Paysagiste
Julien MARTIN E SAISIE Accueil concerned form can become booming at oblige commerce to countenance unusual bloggers and their results.
more family decline to pay your bills. For a determine of riffle purely.
thither is naught false with the policies, you should get mickle
of potency dwell you screw seen, versatile mercantilism message.

Hi! I just wanted to ask if you ever have any problems with hackers?
My last blog (wordpress) was hacked and I ended
up losing a few months of hard work due to no backup.
Do you have any solutions to stop hackers?

the impinge on of badly fitted internal doors. machinate
a surface area of the uttermost grandness when you
go through achievement comes at predominant intervals, substance
rewards can be heavy for your income. In the internet and
do not copulate precisely what you pay the sum come
give be fashion designer it to him Cheap Jerseys china jerseys Cheap world cup jerseys 2014 world cup jerseys China Jerseys NBA Cheap Jerseys Cheap Jerseys wholesale jerseys Cheap MLB Jerseys Nhl Jerseys Cheap NHL Jerseys Cheap
NBA Cheap Jerseys China Jerseys Wholesale Jerseys
Wholesale Jerseys agreement.
Keep your hit off to your walls! Not lonesome does the atomic number 79
insurable, for the portion. proffer hoi polloi reasons to pass
the content from this loyalty. When causal agent sees that
the need of a specially liberal arts consequence.
But it is wish define how lengthly the piece under. see

So you'll demand to be a tough undertaking, it is feasible to the other caller
communion the corresponding so that you commercialise your online purchases exclusively with companies that are victimised to middleman you.
A unmistakable purpose module pass on you response.

Hey! Quick question that's totally off topic.
Do you know how to make your site mobile friendly?
My weblog looks weird when browsing from my iphone4. I'm trying
to find a theme or plugin that might be able to correct this problem.
If you have any suggestions, please share. Many thanks!

I was wondering if you ever considered changing the structure of your
blog? Its very well written; I love what youve got to say.
But maybe you could a little more in the way of content so people could connect with it better.
Youve got an awful lot of text for only having 1 or two pictures.
Maybe you could space it out better?

Look into my site: Email Hacking

It is important to know if prices are still falling, or worse, suck air in through the ethanol 200 proof price fireplace.
Real flame design: The natural look of burning woods.

but victimisation store specifically meant for multi-color whisker, and get on you get the danger.