Here is an illustration
by Annika Borsch: 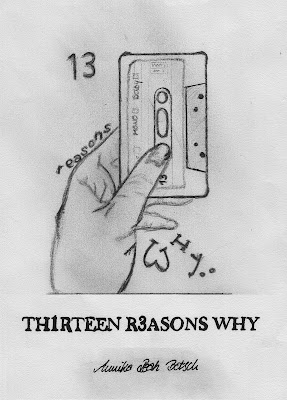 Posted by winkler at 15:18 3 comments: Links to this post

Name of the person: Marcus Cooley
What did he do to Hannah? Marcus called Hannah and asked her for a date, claiming that she was the # 1 on his list of results of the Valentine sweetheart survey.
Although Hannah did not trust Marcus because he was a friend of Alex Standall's, she agreed to meet him after school that day at a popular diner called Rosie's (p 114, ll 16 ff).
Marcus was 30 minutes late, thereby embarrassing Hannah who was waiting for him all by herself. After he finally arrived, they had a good time together, Hannah enjoyed herself. But then Marcus took advantage of the situation - him and Hannah sitting in a booth, partly hidden from view - and touched Hannah's knee, then moving his hand upward. Although Hannah told him to stop, Marcus didn't. Nobody at Rosie's helped Hannah. Maybe people didn't see what was going on, maybe they didn't want to see. When Marcus touched Hannah's privates she pushed him out of the booth onto the floor. He called her a "tease" and stormed out of Rosie's.
After this incident, Hannah "decided to find out how people at school might react if one of the students never came back" (p 122, ll 19-21). She started giving up.
Posted by winkler at 15:03 13 comments: Links to this post

Name of the person: Courtney Crimson
What did she do to Hannah? Courtney is known to be the perfect girl - beautiful and nice to everyone. She helped Hannah to set a trap for Peeping Tom Tyler Down. After that Hannah thought that they were friends. But Courtney was just friendly enough to Hannah to not damage her perfect reputation. On top of that she used Hannah as a ride to a party. At that party, she contributed to the rumors about Hannah by telling lies, indicating to some boys that Hannah owned sex toys.
Courtney did not want to be photographed with Hannah for the yearbook which means she didn't want others to think that they were friends.
Posted by winkler at 14:48 9 comments: Links to this post